My Favorite Microphones for Voice Overs 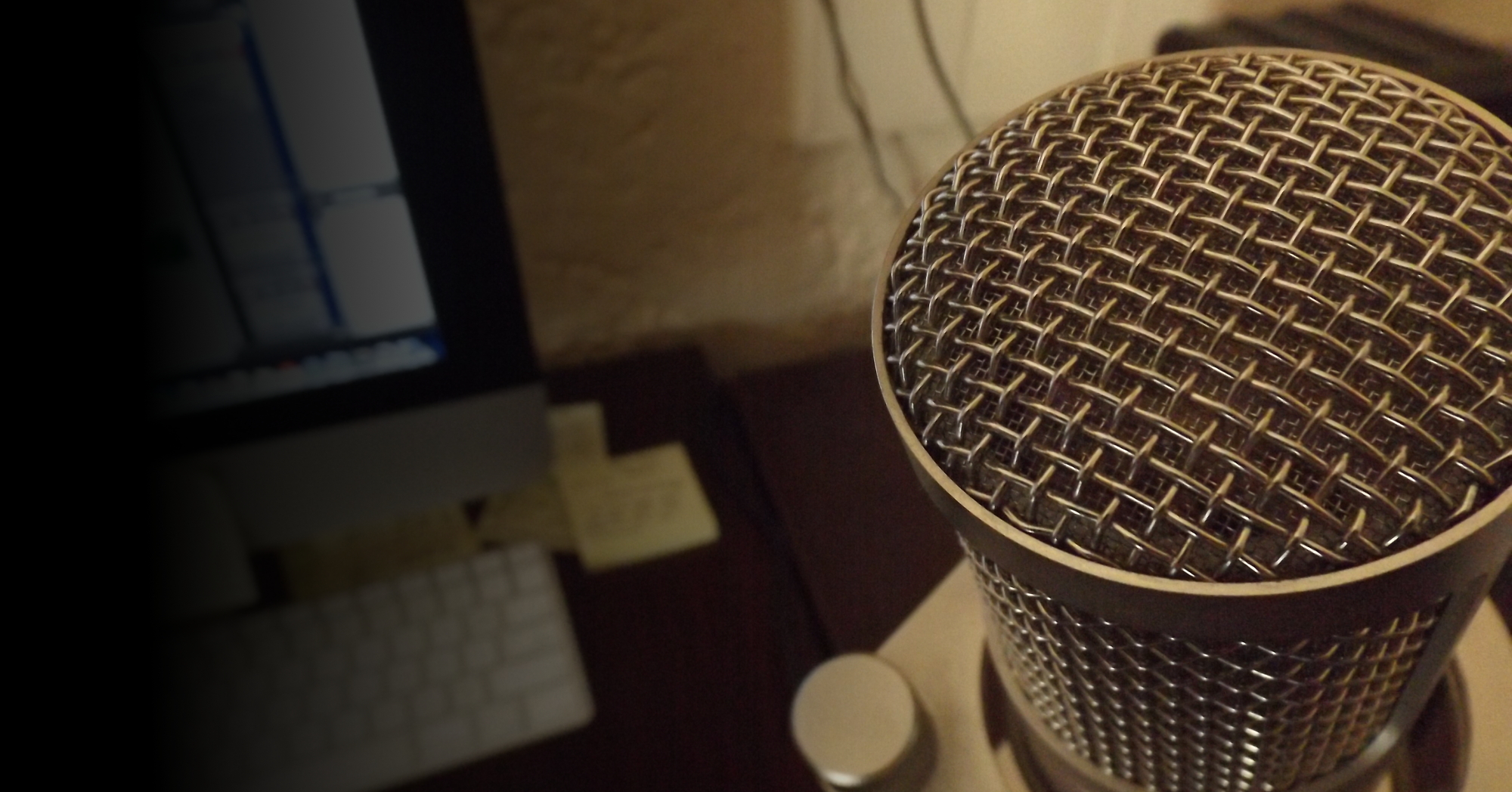 Let me make my level of sophistication as a studio techie plain: years ago I could never understand how my words somehow got stuck to old reel tape, and today I still can’t explain how they become digital files. I just accept they do, and move on. So if you’re here looking for an especially technical explanation of voice over microphones, uh, no. I will however do my best to discuss the many microphones I’ve used, and why I use the ones I do.

It seems like every radio station where I worked from ’83 to ’98 had one of two common microphones: the Sennheiser 421 and the Electro-Voice RE20. To be frank, I never really found either of these at any of the studios where I was booked in the pre-home studio era, and it’s been so long since I’ve used them I can only share my faint memories. Memories of having gone to sweet studios for a VO, then coming back to the station where I worked and realizing that they just weren’t as nice as where I’d been.

Of course this very well could have been because of the excellent processing some of those studios had in their audio chain. Processing that was usually not emphasized at most radio stations. I just remember not being very impressed with the 421, and I didn’t much like the RE20 either. The latter certainly provides that “warm” quality, but it sounded too bass-ey for me; not enough crispness. The 421 is going for $379 these days, and the RE20 $449.

I hired into my first station, WDBI in Tawas City, Michigan, with zero experience at 17, so I really had no frame of reference for mics, but in the years following my departure when I’d listen to their on air folks, I recall thinking highly of the one they used—one I’ve never seen nor heard of since. In fact I had to find my first radio boss, Don Backus, now Eastern Regional Sales Manager at Broadcast Electronics, via LinkedIn, and ask him if he remembered that mic. This was his reply…

“The mic was an Electro-Voice 667A. It was originally designed for use as a motion picture boom mic and had a very directional pattern...but a heck of a bass boost if you got up close to it and worked it right. The best dynamic mic I've ever used.”

It doesn’t look like they've made these puppies for awhile. I’ve noticed several references to them being “vintage,” but have found a couple of used ones on sale for $450 to $699.

I’ll toss one more in, purely because it stood out. When I worked at WJEB/WGMM in Gladwin, Michigan, for 3 or 4 months in 1985, they had this magnificent, old RCA ribbon mic. I contacted my old radio pal, Randy Howell, (who now works at WHNN in Bay City, Michigan, and operates Randy Howell Entertainment ), to see if he remembered more about it. He sent me this pic from around 1975 of he and a friend using it. As we search online, it seems to us it was the RCA 77b. And get this: Randy mentioned that only very recently did he call the current station owner to inquire about buying it. He missed it by one week, as the guy had just sold it to a private collector!

I wish I could remember how it sounded, but since I don’t find many voice actors using them today, I’m guessing they’re not worth the $1,000 to $3,000 price tag I’m finding for used RCA ribbons on eBay.

I booked my first voiceover at Ron Rose Productions in Southfield, Michigan, around 1986, but have no memories of what mics they were using. I do however recall the AKG C414s most of their studios featured throughout the 90s and early 2000s, and I thought they made me sound soooo sweet. I’ve used them a number of times over the years, and that opinion never changed. I’m finding them online for around $899.

There were so many studios I’d get bookings at in the Detroit metro area, but as I google around, it appears many of them are gone or have changed names. Looks like Yessian in Farmington Hills is still there, although now they seem to have locations in New York, L.A. and Hamburg. Kenny at K&R All Media Studios in Southfield seems to be doing great too. Anyway, the following are the mics I had some experience with before starting my own studio.

First, since I loved the AKG C414, when WCRZ/WWBN/WFNT, the radio station in Flint where I was Production Director, let me put together a new studio for them, I just imagined the AKG C3000 would be somewhere in the ballpark for a nice savings. No. I’ve heard it can work well on some musical instruments and on higher pitched female voices, and it only goes for about $270 today, but generally I thought it sucked and cannot recommend it.

Let’s jump right to el gran jefe: the Neumann U87. It’s arguably the best known and most widely used, high-end voice mic in the world. The sad thing is that my first experience with it was terrible. I’d been chosen as the voice of an enormous multi-media project for a major American manufacturing company. These were long, 8 hour sessions, and the folks involved were great.

The good news? I got to use the U87. The bad news? We were in an enormous studio designed for live musicians that was not so quiet. As a result the engineer had to place a noise gate in the audio chain. Today these gates are usually within your editing software, but back then they were electronic devices. When you had a bit of noise in your recording environment, you’d try to set the dB threshold on the device just above that noise—so basically when your voice registered above the threshold, the mic was on, and when it dropped below the threshold, the mic was off. Many gates are very subtle and smooth, but this one would open with a blast and shut so sharply that it sounded awful!

I’ve used the U87 a number of times since then, and the warmth is warm and the clarity is clear! It’s really lovely. I understand at one time they cost over seven thousand dollars, but you can now easily find them for around $3,200.

Mics I’ve Used in My Studio

Considering the gaffe I made choosing the C3000, as I was putting my own studio together, I called as many people whose VOs sounded great as I could find. I received a number of recommendations; one was the CAD Equitek E-200 . I was glad a Guitar Center in Metro Detroit had one, and let me use their little studio, plug in a variety of mics and just listen to myself through headphones. I don’t remember all that I compared, but the E-200 was the winner. There was a combination of warmth and crisp clarity I wasn't getting from the others, so I nabbed it.

While I was standing in line, some guy who certainly knew a lot more about microphones than I did tried to talk me out of the decision. “The Rode. Go for the Rode!” he urged. He explained the capsule in my choice was too small and the Rode (probably the NT1-A) was nice and big. He really pushed. But I’d listened to the Rode, a fine mic. I didn’t care about his technical comments. The E-200 loved my voice, and I never regretted that decision, soon buying a second one and using them exclusively for over 10 years. I don’t know why CAD doesn’t make them anymore, but you can pick up a used one for under $200 today.

Around 2011 I began to take my auditioning more seriously. It happens to most all of us: we start scrutinizing our voice tracks and decide we need a new mic. I’d been reading a voice talent’s article about how the Studio Projects C1 made in China was impossible to distinguish from the U87—and it was only around $300! I read a number of other voiceover reviewers who questioned that, but who were still very impressed with the sound and price. I bought one on eBay, liked it—so bought another within a few months as a backup. You can grab one new these days for around $249.

During the same time I began seriously considering living outside the United States. Although I’d been lucky enough to live in pretty quiet, residential areas, I thought a vocal booth would help ensure reasonable quiet in case things were noisy wherever I moved. I got one. And hell, if I’m going to get serious about this voice acting thing, why not spring for the mic I’d only used a couple of times before and fell in love with? Yes the Sennheiser MKH-416 Short Shotgun, my desert island microphone.

Hey I’ll do my best to describe it, but you really should find a way to hear yourself through one of these babies. It seems like this mic doesn’t just sit there and wait for your voice to fill it; instead it reaches down into your diaphragm and pulls it out as if on a dreamy cloud. Powerful, crystal-crisp, smooth and boomy. How was that? Look, just frigging try it. They come in at $999.

So I’ll mention one more mic I’ve had occasion to use: the Neumann TLM103 . Yes, it’s nice. Very nice. Nice enough that I just bought one used from a local musician friend here in San Miguel de Allende who gave me a nice deal. You can get a new one for $1,099. I’ve only experimented with mine in my studio recently, confirmed it was delicious and packed it away as a backup should something happen to my 416. To me these two mics offer many of the same qualities—except perhaps for that “reach into your diaphragm” thing I’ve found exclusively with the 416.

Landing on a Microphone

At this writing my new home is under construction, and I’ll have a very nice, double-wall studio with lots of room. Since the outer wall will be over 6 inches of poured concrete, there’ll be a 21 inch air gap and plenty of Green Glue, it should be a veritable audio fortress. So I’m 90% sure I’ll be able to lose the vocal booth, which will result in a much better overall sound. My intention is to have two booms: one with my go-to MKH-416, the other with the TLM103. So I’ll experiment more, and discover which one works best with which types of voiceovers.

Landing on the right microphone is one of those elements of a voiceover career that can be obsessed about unnecessarily. You’ve just read about my love for the MKH-416, but I built a very successful career using nothing but a mic you may never have heard of—and isn’t even made anymore. I suggest you find someplace where you can compare a handful of them; maybe a local musician store. Pick the one within your budget that seems to like your voice the most and go for it. As your career unfolds and you can tuck away a few bucks, move on to another if you find it an improvement. Obsessing: not good. Recognizing your career occasionally deserves a little investment: right on.

So, like I said, this is no techie article. But remember the guy who tried to talk me out of the CAD I started my studio with? He was a techie. And what if I’d taken his advice, placing more emphasis on his technical explanations than my own ears? Every time I laid down a voice track I’d have considered it a little worse than if I’d gone with the one I thought sounded best. Bad idea, buster. If you’re a beginning voice actor it’s natural and smart to look for advice. Fine. But eventually you’ll have to learn to trust yourself, and going with the mic you think is right is a great place to start.